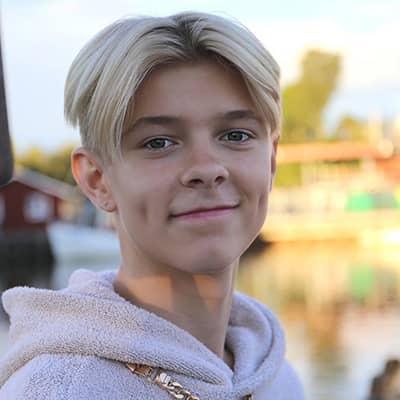 Theodor Haraldsson is a Swedish Musical.ly (now TikTok) celebrity. Theodor has a massive fan following on social media thanks to his dance moves and lip-syncing covers on the TikTok app.

On July 17, 2005, Theo Haraldsson was born in Linköping, Sweden. His mother and father are frequently seen in his vlogs and are extremely supportive of his career. He has a brother named Alex and a sister named Alice, both of whom appear frequently on his vlogs. To protect the family's privacy, little is known about his education on social media. Marcus and Martinus, twin brothers, and Norwegian pop sensations are close friends of Theo. Similarly, he regards Swedish celebrity hairstylist Bobby Oduncu as a friend and mentor in the industry.

Although Theo joined YouTube on November 3, 2014, he didn't take social media seriously until 2016. His first YouTube video, 'Vlogg: Antligen Mexico!,' was about a trip he took to Mexico. Later that year, Theo Haraldsson launched his 'Theoz Official' TikTok account. The first video cover of 'Starving' was a hit. Theo Haraldsson's TikTok covers include 'Greenlight' by Pitbull, 'Despacito' by Luis Fonsi, 'Battle Scars' by Lupe Fiasco & Guy Sebastian, and 'Perfect' by Ed Sheeran. He enjoys covering hip-hop songs and has become a fan favorite thanks to his wicked dance moves. With over 2.1 million TikTok subscribers, the Swedish star appears to be unstoppable.

While his primary focus is on TikTok (formerly Musical.ly), Theo Haraldsson also has a fan base of over 153k on YouTube. This is primarily due to his more personal vlogs, which feature his family or fans. He uses it as a platform to connect with his fans on a more personal level. 'Jag Sg Dubbelt P "Grönan"', 'Tittar P Era Musicallys!', and 'Hänger Med Marcus & Martinus!!' are among his most popular vlogs, with thousands of views. While the majority of his vlogs are in Swedish, many of them now have English subtitles. This was largely due to the growing international fan base of Theodor Haraldsson.

He is not limiting his creativity to just performing on other celebrities' songs; he has begun to venture into new territories. The debut Swedish single 'Het – Theoz,' released on Theo Haraldsson's YouTube channel on June 28, 2018, has gone viral, garnering over 2.7 million views. His musical style in the song is heavily influenced by his love of Latin music and hip-hop, and he plans to release more original songs in the near future.

As he was involved in social media; musically, the estimated net worth of Theodor Haraldsson is $1-5milion.

Theodor Haraldsson is a very handsome young man. he has blonde hair and with beautiful pair of green eyes.

You may know like to know about the gossip, dating history, and more about Wyatt Bennett, FlightReacts, Eva James Jenner, Vanessa Merrell