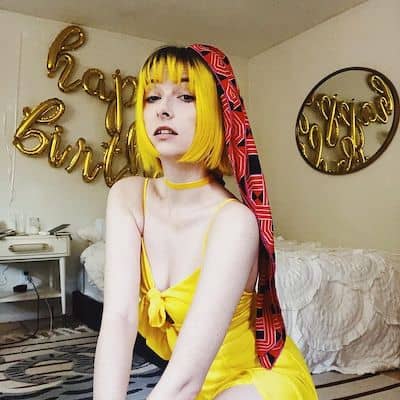 Tessa Violet is a YouTube personality, singer, and composer. She rose to notoriety as a vlogger after winning $100,000 for having the most commented video on YouTube in 2009. Her self-titled channel is one of the 500 most-subscribed YouTube channels in the world, with over a million subscribers.

Tessa Violet was born on March 20, 1990, in Chicago, Illinois, in the United States. She grew up in Oregon and attended 'Ashland High School.' Tessa became interested in acting at a young age and performed in high school theater.

Tessa took on a school project in 2007 that required her to create a vlog. She was no stranger to doing a vlog because she already had a YouTube page. Tessa had little trouble acing her project because she had already posted a few vlogs on her channel.

She graduated from high school on June 6, 2008, as a member of the 'National Honor Society.' She had already begun her career as a fashion model and had been to Thailand and Hong Kong as part of her modeling assignments. Tessa, on the other hand, quickly dropped modeling in order to focus on her social media business, which would eventually serve as a springboard for her music career.

Tessa moved to Seoul, Korea, shortly after graduating, where she learned the intricacies of creating a range of videos, including music videos, stories, and skits. In 2009, she relocated to New York City. Her popularity as a YouTuber had already surged by that point. In the same year, she won $100,000 in a YouTuber competition for the most commented video.

She collaborated with 'Maker Studios' in 2010 to create two videos, 'Star Trek Girl' and 'Wizard Love - ft. Heyhihello.' Violet's authority as a successful YouTuber and vocalist was cemented when both videos became popular on the internet. Her channel is one of the 500 most-subscribed YouTube channels, with over a million subscribers.

Tessa Violet is also a popular Instagram user, with over 116,000 followers. Tessa has over 150,000 Twitter followers and is well-known on the famous microblogging site. She also has a Tumblr account.

Tessa started her musical career in 2008, using her YouTube site as a platform. In 2012, she released her first extended play, 'Days of.' In 2014, she rose to notoriety as a musician with the publication of her smash album 'Maybe Trapped Mostly Troubled.' Seth Earnest produced the album, which examined themes such as love, anxiety, codependency, and self-worth.

Tessa went on a number of tours following the success of 'Maybe Trapped Mostly Troubled,' including 'The Living Room Tour,' which featured Rusty Clanton. The journey took them to nine different cities, where they performed live in the living rooms of random fans. Rusty Clanton played his original music during the first 30 minutes of the show, and Tessa played for the next 30 minutes.

Tessa and Rusty took the 'Return of the Living Room Tour' across the western part of the United States in July 2015. She performed on 'The TransAtlantic Tour' in 2016, among musicians such as Jon Cozart, Dodie Clark, and Rusty Clanton. She also accompanied fellow YouTuber and musician Bry O'Reilly on his UK tour.
She released an extended play named 'Halloway' on October 14, 2016. The EP contained five tracks, one of which being the popular single "Dream." In 2018, she released her second album, 'Bad Ideas.' Tessa Violet has gone on several tours as a result of her collaboration with various musicians and social media icons.

Tessa Violet had cooperated with local bands and fellow YouTubers in the start of her career as a YouTuber. On January 11, 2012, she embarked on a 17-city tour dubbed "The Dial Up Tour," which took her across the United States and Canada. Shawna Howson, Olan Rogers, Alex Carpenter, Mitchell Davis, Jason Munday, and Kyle Sibert were among others that joined her.

Tessa had already participated in Rusty Clanton's YouTube videos and vlogs prior to teaming with him on their tours. In reality, in December 2014, she formed a band named 'People You Know' with Rusty Clanton. The album 'You, Me, and Christmas' was released by the pair. The CD included four cover songs as well as an original song named "You and Christmas."

Tessa Violet has also worked with a number of other YouTubers and musicians, including Emma Blackery, Hazel Hayes, Dodie Clark, Bry, Hannah Witton, and Lucy Moon. She has also collaborated with Shawna Howson on numerous occasions, appearing in a number of videos together.

She has appeared in a number of music videos as a guest artist, including 'Beat the Heat,' 'The Break Up Song,' 'It's Chill,' and 'Where Did U Go.' She has also appeared in Ray William Johnson's project, 'Breaking Los Angeles.'

Tessa took up the role of director of photography for Shawna Howson's video titled 'Sail' in 2011. She also appeared in the video, which has received millions of views. She appeared in one of the music videos for the popular American Christian rock band 'Family Force 5' on September 24, 2012. (FF5). Tessa also directed a music video for the song 'Chainsaw.'

Tessa Violet, in addition to being a popular YouTuber and musician, has also demonstrated her acting abilities at various stages of her career. After acting in the online series 'The Professionals,' she went on to play Tricia in the independent film 'The Matchbreaker.' She also composed the song 'Cash Cash Money' for the film.

Tessa Violet is a business owner who sells clothing and accessories online. Her internet business sells T-shirts and sweatshirts, among other wonderful items.

Tessa may have made a lot of money during her professional career. Regrettably, she has not provided any details about his financial worth or salary. Seeing her performance on social media, as a singer, composer, and actress. We could assume she has a solid net worth and salary.

She is well-organized, ambitious, and friendly. She has also revealed to her supporters that she has been receiving counseling for several years. Tessa Violet, despite her fame as a performer, takes heroic efforts to connect with her audience as a person rather than a performer. She is close to Rusty Clanton and has worked with him on several occasions.

Tessa is a lovely and accomplished lady. She is currently of normal height and weight. As a result, her actual height is 5 feet 10 inches, and her body weight is 63kg. Her physical measurements are 32-23-34. She, too, has dark brown hair and green eyes.

She is present on social media. She has a sizable fan base on social media platforms such as Facebook, Twitter, and Instagram. She, on the other hand, has over 95k Facebook followers and over 283k Instagram followers. As a result, she has more than 2000 Instagram posts. Similarly, she joined Twitter in September 2008 and currently has 181k followers. She is also active on YouTube, where she has 1.73 million subscribers.