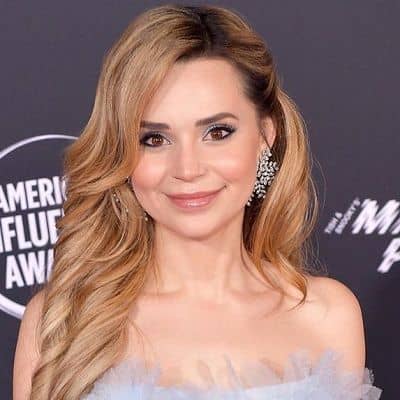 Rosanna Pansino is American singer, author , actress, baker also a YouTuber. She is very famous for her own YouTube channel in which she posts cake challenges.

Rosanna Pansino was born on June 8, 1985 in Seattle, Washington , United States of America. According to her date of birth her astrological sign is Gemini. She also has a younger sister named Molly . She was inspired to be a baker from her own grandmother. She has no disclosed about he parents but she once posted about the reason behind her father's demise.

Regarding her educational background she attended Pacific Lutheran University.

Rosanna was the contestant in the reality series Scream Queen's which was her first time on television. She was in the ninth position. She also gave a try as an actress in small roles on the shows like " Parks and Recreation", " CSI: Crime Scene Investigation". She also started her own YouTube cannel after she got inspired from her two friends who also used to work on YouTube. She also acted as Violet in YouTube series Broken Quest. She also acted as Sandy in high school production of Musical Grease. Rosanna, Michelle, Phan and Bethany Mota were first YouTubers to be featured in print and tv advertisements. She has never seen a baking show so she planned to start "Nerdy Nummies" that became so popular and became one of the popular baking show on YouTube. This show has also been nominated for four Streamy Awards. Ronsanna also appeared as a voice actor for the tv series Emo Dad  and also acted in Disney Channel series Bizaardvark as herself in year 2016. She also played a role in third season of YouTube Red's Escape the Night as The Jet Setter in year 2018 and in the fourth season of The Socialite in year 2019. In 2015 her first single was released by the Pansino which was titled as "Perfect Together"  making her first official debut as a musical artist. This song gained so much popularity and she also took so much other music project after this. In 2015 book on nerdy nummies namesd as " The Nerdy Nummies Cookbook" was released by Pansino. This book became New York times bestseller has been listed on "50 Must Read Books by YouTubers". In year 2019 she appeared as  a guest judge on Netflix's original competitive-baking show " Nailed it!"

She i s currently in romantic relationship with Mike Lamond . They started dating since 2012 . He is a esports commentator who is currently working on Nerdy Nummies. She has always maintained a clean profile.

She is multitalented public figure no doubt she earns good sum of money. According to resources her net worth her net worth is estimated to be around $9 million.