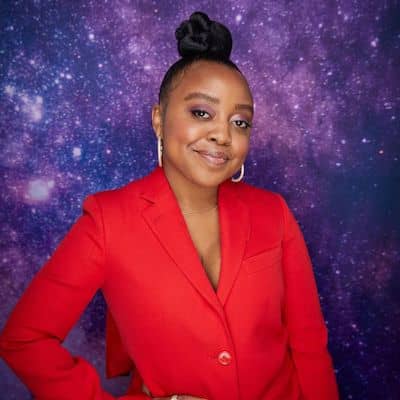 Quinta Brunson is a prominent writer, comedienne, actress, and social media star. Her Instagram video series, 'The Girl Who's Never Been on a Nice Date,' is her most popular.

On December 21, 1989, Quinta Brunson was born in Philadelphia, Pennsylvania. She grew up in Philadelphia with her brothers and sisters. Similarly, she grew up watching sitcoms. She also became interested in comedy and realized early on that she wanted to be an actress.

She enrolled at the renowned 'Temple University. There she performed in the comedy show 'Temple Smash.' She dropped out of university, however, to pursue her dream of becoming an actress. She then joined 'The Second City in Chicago, where she took an intensive improvisational comedy course.

She adores animals. In fact, all of the animals featured in her 'Up for Adoption' series are available for adoption. She enjoys rock climbing because she believes it is a fun activity that also keeps her fit. She also enjoys visiting 'Universal Studios Hollywood,' which is one of her favorite places on the planet. Brunson is an accomplished dancer. Many of her videos feature her dancing abilities. Currently, she resides in Los Angeles, California.

Quinta Brunson began her career by posting social media comedy videos. On Instagram, she found success and fame with her video series titled 'The Girl Who's Never Been on a Nice Date.' The Instagram series went viral, landing her a job with 'BuzzFeed Motion Pictures.' In 2014, she joined the Los Angeles-based internet marketing service and later became a development partner at 'BuzzFeed.'

She created her first full-fledged comedy series, 'Broke,' while at 'BuzzFeed'. There she sold to YouTube Red (YouTube Premium). In the year 2017, she released a new project called 'Up for Adoption.' It was broadcast on Verizon's free streaming service 'Go90. She was cast as Ruby in the CW comedy-drama pilot 'The End of the World as We Know It' in 2018. The pilot is based on the same-titled book by Iva-Marie Palmer.

Likewise, she has a sizable fan base across social media platforms. She has earned the respect and admiration of her fans, as well as the praise of other internet celebrities such as King Bach, AlphaCat, and DeStorm, as social media stars.

Her Instagram account has over 895,000 followers. Her Twitter account now has over 390,000 followers. She also has a YouTube channel with the same name. 'What It's Like To Be The Only Black Friend,' is one of the most popular videos on her channel. 'In Real Life Rap Lyrics,' 'Natural Hair vs. Perm,' and 'If Everyone Was Honest During Job Interviews.'

Quinta Brunson has made a good living throughout her professional career. Her net worth is estimated to be around 0.3 million.

Quinta Brunson is that she is in a relationship. However, she has not revealed his name and has only posted two photos on her Instagram account. She appears to be more concerned with her professional life right now than with speaking openly about her personal life in the media.

Quinta stands at the height is 5 feet and her weight is 49 kilograms. However, her chest-waist-hip measurements, dress size, shoe size, and so on are not currently available. Similarly, she has beautiful dark-brown eyes and hair.