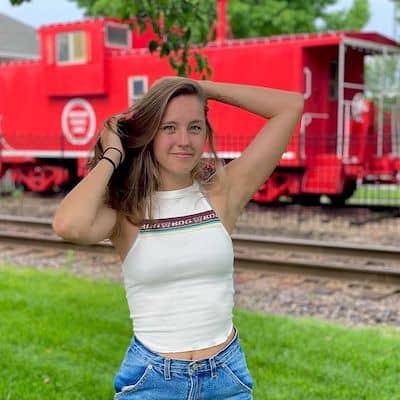 Peyton Coffee is a well-known social media personality best known for her lip-sync videos on TikTok, a popular video-sharing app with millions of users. She rose to prominence after appearing in Vine videos created by her father, Jason Coffee, who had thousands of Vine followers. Peyton and her brothers appear frequently on their father's YouTube channel, which has thousands of followers.

Peyton Coffee was born on January 28, 2004, to Jason and Chassy in California, USA. Peyton and her family relocated to Kansas City, Missouri, where she spent her early childhood. Later, the family relocated to Hawaii and fell in love with the place.

Jason Coffee, Peyton's father, works for Starbucks, a well-known American coffee corporation and coffeehouse chain. His life changed dramatically when he started submitting videos to Vine. Vine's account had amassed almost 900,000 followers by the time it was shut down. He is well-known on social media sites including TikTok, Instagram, and YouTube. Chassy Coffee, Peyton's mother, is not on social media. She has, however, been seen in films shared by Peyton and Jason.

Issac and Caleb are Peyton's two siblings. she and Caleb Coffee frequently cooperate on TikTok videos. She also has an Ashly sibling.

Peyton prefers television shows to movies. Stranger Things, a science fiction-horror web television series on Netflix, is one of her favorite shows. Peyton enjoys shopping and traveling, and she has visited several popular vacation destinations across the United States. Though she currently resides in Hawaii, she wishes to relocate to California.

Jason Cofee, Peyton's father, introduced her to social media at a young age. She gained popularity after appearing in her father's Vine videos. When her friends encouraged her to emulate her father, she decided to follow in his footsteps. She then created a Vine account and began posting videos that received a lot of attention. Her popularity grew after her Vine account gained hundreds of followers. Peyton's account had more than 60,000 followers when the upload option on Vine was disabled.

She then started posting lip-sync videos on TikTok, which drew a lot of attention. Peyton became one of Hawaii's youngest Tik Tokers with over a million followers on the popular video-creation app on December 16, 2018. Peyton is also well-known on Instagram, where she has thousands of followers. She also has a YouTube channel, but she isn't very active in posting videos on it. She does, however, appear frequently on her father's YouTube channel, which has thousands of views and subscribers. Peyton is also well-known for appearing in amusing videos on her father's TikTok channel, 'jasoncoffee,' which has millions of followers.

Peyton Coffee's net worth is $400 thousand as of 2022. She is a well-known social media personality with millions of followers, so she is compensated handsomely for brand endorsements and paid promotions on her accounts. Peyton also makes a good living from affiliate marketing, and her YouTube channel earns a lot of money from advertising.

Peyton Coffee is one of the most beautiful and fit models in the modeling industry, and her slim waistline is so appealing that anyone can fall for her. She is very concerned about her fitness, and she works out regularly, does yoga, and exercises every day. However, you are also aware that a diet plan is essential for a strong and fit body. She goes to the gym on a regular basis, and when she is unable to go, she works out at home. Many of her fans and followers frequently inquire about Peyton Coffee's height.

As a famous YouTuber and TikToker, she is active on social media. she has an account on Instagram with 2.5M followers, youtube with 1.58M subscribers, Twitter with 1M followers, and TikTok with 33.6M followers.