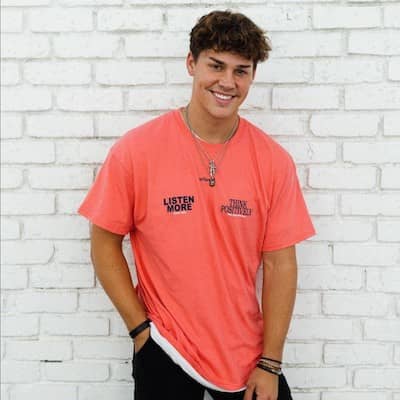 Noah Beck is a former American football player who has become a social media sensation. He is best known for posting dance videos, skits, and lifestyle and sports videos on his TikTok account. Noah Beck rose to fame as a social media influencer after starting to post TikTok videos while in quarantine due to the Covid-19 pandemic in 2020. In 2021, he was the subject of Noah Beck Tries Things, a six-episode series that aired on AwesomenessTV.

Noah Timothy Beck was born on May 4, 2001, in Peoria, Arizona, USA. He grew up with his older sisters, Haley and Tatum. Noah Beck became interested in soccer at a young age and began playing for SC del Sol, a local Phoenix soccer team. At the age of 13, he was named captain of the United States Youth Soccer Olympic Development Program, a position he held until 2017. He moved to Utah while attending Ironwood High School and became a member of the Real Salt Lake Academy.

Noah Beck enrolled at the University of Portland in 2019 after graduating from high school. He then became a midfielder for the Portland Pilots of the men's soccer league. The team competes in NCAA Division I men's soccer competitions on behalf of the university. Due to the restrictions imposed by the Covid-19 pandemic in Portland, Oregon, Beck was forced to complete his second semester of freshman year online. After realizing that academics were not his cup of tea, he dropped out of university.

Noah Beck began using TikTok to pass the time while quarantined during the Covid-19 pandemic. He began by posting comedy, dance, skits, and other videos about sports and lifestyle. Surprisingly, many of his videos went viral within a month, cementing his status as a popular TikToker. Noah Beck's popularity grew over the next few months, to the point where he was invited to join the popular Sway House in June 2020 after being contacted by one of the house's members, Blake Gray. Noah Beck began collaborating with other popular social media influencers such as Josh Richards and Dixie D'Amelio after joining the Sway House.

Noah Beck's TikTok popularity helped him gain followers on other major social media platforms, including YouTube, Twitter, and Instagram. Several of his YouTube videos, including Dixie's Daycare and Who Knows Me Better? BeckSeat Driver Ep.2 ft. Vinnie Hacker's Crush GF VS BFF I Surprised Dixie With This, and She Didn't Say I Love You Back have each received millions of views. In 2021, he began taking acting classes in order to establish himself as an actor in the American film and television industry.

Noah Beck rose to fame after his TikTok videos went viral on the internet. His entertaining content and appealing personality were among the many reasons his videos went viral. His TikTok account quickly grew to millions of followers, establishing him as a TikTok celebrity. His TikTok account has over 28 million followers. Noah Beck was named one of the top ten breakout content creators of 2020 by TikTok.

Noah Beck launched his self-titled YouTube channel on July 31, 2020, after establishing himself as a TikTok star. By this point, he had also joined the Sway House and began featuring fellow social media stars in his YouTube videos, which increased the popularity of his channel. His YouTube channel currently has more than 65 million views and over 1.5 million subscribers. Noah Beck is also well-known on social media platforms such as Instagram and Twitter. His Instagram page, which features interesting photos from his personal and professional life, has over seven million followers. His Twitter account, which he started in December 2015, has more than 955k (959.7)2 followers.

Noah Beck's popularity skyrocketed in 2021 when he was featured in the short-form series Noah Beck Tries Things. On January 22, 2021, AwesomenessTV debuted the six-episode series. Beck's girlfriend and friends are also featured in the series. He appeared on the digital cover of VMan magazine in March 2021. The magazine, which focuses on men's fashion, is an offshoot of the popular V magazine. The same year, Beck was a VIP guest at a Louis Vuitton menswear show, where he reviewed Virgil Abloh's collection. Because of his popularity, his style and fashion sense have drawn comparisons to Prince and David Bowie.

Noah Beck's net worth is estimated to be $5 million, which is bolstered by his social media presence, paid promotions, brand deals, paid content, and sponsorships. He also has nearly 1 million YouTube subscribers. As a result, he can also earn a lot of money from ad revenue.

\According to some sources, he earns between $1.5k and $2.6k per TikTok post. Noah Beck earns more than $45,000 per month. Noah is the first choice for many major brands and corporations. Noah has also joined 'TalentX Entertainment,' a leading social media monetization and talent development firm.

Noah is currently in a relationship with a famous American singer Dixie D’Amelio.

Noah is a smart and attractive young man with a daring personality. He has a super-strong physique and impressive body measurements. He stands 5 feet 9 inches tall and weighs approximately 74 kg.

He has stylish black color hair and also has blistering dark brown color beautiful eyes. He is a fitness freak who enjoys maintaining his physique and health through regular exercise and gym sessions.

As a famous YouTuber and TikToker, she is active on social media. she has an account on Instagram with 9.1M followers, youtube with 1.58M subscribers, Twitter with 1M followers, and TikTok with 33.6M followers.