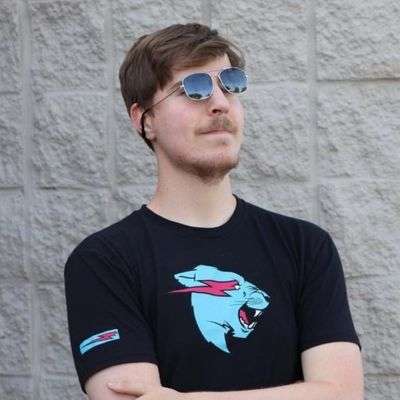 MrBeast is one of the most famous and well-known American YouTubers as well as social media personalities. Moreover, he is mostly known for his expensive stunts as well as philanthropy. In addition, he has two YouTube channels including his main and original YouTube channel.

The full name of MrBeast is Jimmy Donaldson. He was born on May 7, 1998. His birthplace is Greenville, North Carolina. Based on his date of birth, his zodiac sign is Taurus. Similarly, he belongs of American nationality whereas MrBeast's ethnicity is unavailable. Also, he was born to Mrs. Donaldson and Stephen Donaldson.

According to sources, Jimmu was raised only by his mother. He also has a brother. And, his name is CJ Donaldson. CJ Donaldson is a well-known content creator and professional social media star. On the other hand, he is a graduate of the Greenville Christian Academy. During his college days, he used to get involved in sports such as baseball as well basketball. Talking more about his educational details, he completed his graduation in the year 2016.

In 2012, Jimmy created his YouTube channel and started posting random videos on it. One of his video series named "Worst Intros on YouTube" helped him to gain fame to a far extent. afterward, he became popular through his gaming-related videos such as "Minecraft Factions: A Guy Sent His Home in Our Base". Simultaneously, he then started coming up with expensive videos.

Later on, he started posting unique videos. With the achievement of global recognition, it was because of his heart-warming videos on his channel. Consequently, he then began giving donations to random Twitch streamers. Astonishingly, he is one of the most popular YouTubers of all time. He has been able to earn around 96 million subscribers on his YouTube channel.

Talking more about his YOuTUbe channel, he also made several comedy videos related to Donald Trump during the 2016 election season. Not only for donating the money, but he is also famous for the videos of saying or reading long words or repeating them or doing certain tasks for hours or even days on end. Secondly, his second channel was named BeastHacks which was previously named Mr.beast. In the channel, he used to react, commentate, and review life hacks with his friends. Also, he bought billboards and radio advertisements to help PewDiePie gain more subscribers than T-series.

In addition, he is also famous for his TikTok account as well.  He has over 367 million followers on it as @mrbeast. Jimmy was also sponsored by TikTok on only one of his videos. Likewise, he was also sponsored by EA to promote Star Wars Jedi: Fallen Order on an Instagram giveaway and most notably Apex Legends. Other than this, he also uses funds from his official merchandise store to help create costly videos by promoting gift codes with the names of his crew to remove 10% off the first order.

Talking about his awards and achievements, Mr. Beast received the award of Breakout Creator at the 9th Streamy Awards. He was nominated for ensemble cast and creator of the year for the same award in 2019. In 2020, he is the winner of the YouTuber of the Year in the 12th Annual Shorty Awards. In the same year, he is the winner of Creator of the Year, Live Special, Social Good: Creator, and Social Good: Nonprofit or NGO in the 10th Streamy Awards.

Net worth and Partnerships

Based on some latest resources, Jimmy's estimated net worth is more or less $54 million. Amazingly, he is one of YouTube's highest-earning creators in January 2022. Forbes had also stated that his income in 2021 has placed him 40th in the 2020 Forbes Celebrity 100.  Also, he can earn around $14 million annually. His primary source of income is through his profession as YouTuber.

For a large sum of videos, Jimy once collaborated with Honey. Honey is a free browser extension that helps save money on a lot of shopping websites. Likewise, Quidd is his first sponsor and they have sponsored videos like when he gave a homeless man $10,000. Also, he paid expenses for when he took a 2,256-mile trip in a Uber from North Carolina to California. Quidd is an app where you buy stickers to text to friends.

Once Jimmy was heavily criticized for using clickbait to gain money and subscribers. One of the YouTubers with the username, @iox exposed him for starting several fake gift card giveaways by mocking other YouTubers. He has also done such giveaways, at the end of his videos. In 2018, a YouTuber, FlyyDoesYT posted a video and claimed that his videos are fake and only start at the beginning, such as in I Tipped Waitresses $20,000.

Besides, ever since Jimmy released his viral video Can 20,000 Magnets catch a Bullet Mid-Air?. It quickly became his most viewed video of his in three days. However, it became pretty controversial due to the thumbnail. In one of his videos, I Opened a FREE BANK, people also started to claim that he never actually gave away the money as he shows in his videos.

In regards to Jimmy's personal life, he is in a happy and romantic relationship with Maddy Spidell. According to some sources, they met for the first time through Twitter. The news was confirmed in June 2019. Nevertheless, there is not much information regarding their relationship. Other than that, there are not many details about their past affairs. Similarly, it also seems as if he has also been keeping a clean public relations profile that is away from scandals and controversies.

The exact height of MrBeast is 6 feet and 3 inches. His weight is around 82 kgs. However, he has not claimed much about his body measurements such as his chest size, waist size, hop size, shoe size, and clothes size. Nevertheless, he has brown hair color and green colored eyes.