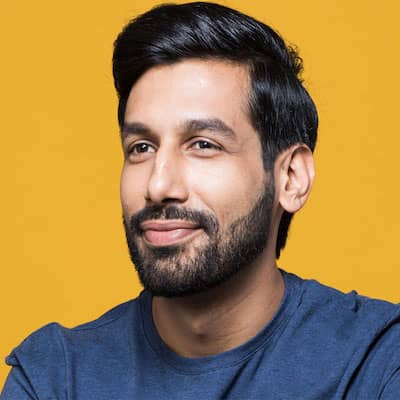 Kanan Gill is an Indian stand-up comedian and YouTuber who rose to prominence with his YouTube series 'Pretentious Movie Reviews,' in which he hilariously reviews flawed yesteryear Bollywood films. Biswa Kalyan Rath, another stand-up comedian, is his comedy partner in this widely popular series.

Kanan Gill was born on December 24th, 1989. As of the year 2022, his age is 32 years old. He attended both Ahlcon and Frank Anthony Public Schools. Later, he attended the M. S. Ramaiah Institute of Technology, where he received his B.E. in Computer Science.

Kanan Gill was a funny kid who loved to joke around and pull pranks from a young age. However, having been born into a typical Indian family, he had no doubt that he would one day pursue a conventional career that would provide stability. He chose to study computer engineering after high school, despite his love of comedy. During his college years, he joined comedy bands and spent his free time writing silly songs. He graduated and got a good job as a software engineer at Exeter Group Inc. Even while working as a techie, his passion for comedy remained, and he entered a number of comedy competitions, winning the Punchline Bangalore competition.

Another win at the Comedy Store in Mumbai followed, giving Gill the confidence to leave his engineering job and focus solely on his comedy career. Kanan Gill met another aspiring comedian, Biswa Kalyan Rath, during his early days as a comedian. The duo collaborated to create the YouTube series 'Pretentious Movie Reviews,' in which they review Bollywood films in their own amusing and twisted ways.

They received a large fan following in movie-crazy India after reviewing popular films such as 'Gunda,' 'Hum Saath Saath Hain,' 'Prem Aggan,' and 'Aap ka Suroor.' Their rising popularity in India quickly gained them international attention, and Gill was given the opportunity to work on the American channel Comedy Central's improvised sketch comedy show, 'The Living Room.' He also co-hosted the YouTube FanFest India and was a driving force behind the YouTube Comedy Hunt. Kanan Gill, eager to achieve, even more, made his Bollywood debut in 2017 with a minor role in Sonakshi Sinha's 'Noor.'

Kanan Gill is one of the wealthiest YouTube stars and one of the most popular. According to Wikipedia, Forbes, and Business Insider, Kanan Gill's net worth is estimated to be $1.5 million.

Kanan Gill is possibly single and has never been married, according to our records. Similarly, he is not dating anyone as of 2022.

Kanan Gill's height is 5 feet 10 inches. Besides, his weight is unknown, and his body measurements will be updated soon. Moreover, he has beautiful brown hair with pair of brown eyes.