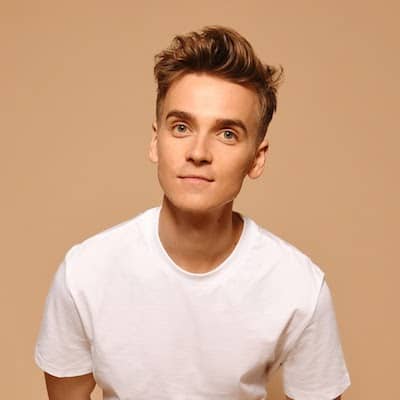 Along with being a part-time novelist and filmmaker, Joseph Graham "Joe" Sugg is a well-known British YouTuber and vlogger. He is well-known for his "ThatcherJoe," "ThatcherJoeVlogs," and "ThatcherJoeGames" YouTube accounts.

Sugg attended The Corsham School in Corsham, Wiltshire, where he earned two A*s, an A, and a B for his A-level coursework. He was born in Lacock, Wiltshire.  His apprenticeship as a roof thatcher is where the name of his YouTube channel, "ThatcherJoe," came from. He is the younger brother of Zoe Sugg, a YouTube star and blogger who is also known as Zoella.

Sugg learned that his Jersey-born ancestors were involved in electrical telegraphy during the early stages of its creation and use in a November 2021 edition of Who Do You Think You Are? Additionally, he discovered that in the middle of the eighteenth century, Huguenot exiles from Frênes in Normandy who were fleeing religious persecution in France made their way to Jersey.

The road to fame for Joe Sugg has been thrilling! He signed up for YouTube in 2011, and two years later, he surpassed the one million subscriber milestone. He worked very hard during those two years, producing films virtually daily. Throughout his journey, he received inspiration and encouragement from his sister "Zoe," who is also a well-known fashion and beauty YouTuber.

Soon after 2013, his channel began to become even more well-liked, and his subscriber base kept growing. His videos were so entertaining and fascinating that people began posting them on their personal social media pages. Sugg then had a great deal of good energy as a result, and he began producing increasingly more videos.

He began producing videos that incorporated pranks and challenges in addition to releasing impression videos. Sugg's popularity increased dramatically as a result of this move, reaching previously unheard-of heights on social media. Since it was founded in November 2011, ThatcherJoe's channel has amassed a sizable subscriber base. Joe Sugg enjoys enormous popularity not just on YouTube but also on Instagram and Twitter. Later, he launched the channels "ThatcherJoeVlogs" and "ThatcherJoeGames," respectively. These two channels are both quite well-liked.

In the 2015 UK release of the film "The SpongeBob Movie: Sponge Out of Water," Joe Sugg, his friend Caspar Lee, singer Stacey Solomon, and comedian Alan Carr all made guest voiceover appearances. He co-starred with Lee in the 2015 direct-to-DVD movie "Joe and Caspar Hit the Road." The following year saw the publication of a second DVD titled "Joe & Caspar Hit the Road USA." Alongside fellow YouTubers Marcus Butler and Alfie Deyes, Joe Sugg appeared in one episode of the British TV show "Release the Hounds." On March 2nd, 2017, this episode aired. The graphic novels "Username: Evie" and "Username: Regenerated" were written by him and were released in 2015 and 2016, respectively.

Joe Sugg once belonged to a "YouTube Boyband" that earned money for the British charity "Comic Relief." He also performed on "Do They Know It's Christmas?" as a member of the charity supergroup "Band-Aid 30," which was formed to raise money to combat the "Ebola virus outbreak" in Africa.

In winning the title for his YouTube career, Joe Sugg also found success. He won the Best British Vlogger category of the BBC Radio 1 Teen Awards in 2015, as well as the Social Media Superstar category of the 2019 Global Awards. She has also received nominations for the 2020 WhatsOnStage Awards for Best Supporting Actor and the 2016 Streamy Awards for Best International YouTube Channel ThatcherJoe.

Through his YouTube career and other appearances, Sugg has made a respectable amount of money. On his YouTube channel, he has supported numerous products. His estimated net worth for the year 2020 is $6 million. With his earnings, he enjoys a luxurious lifestyle.

Joe Sugg is in a relationship, to consider his current situation. Since late 2018, he has been dating Dianne Buswell, the partner he danced with on Strictly Come Dancing.

Sugg and Dianne Buswell, the Strictly runner-ups, are completely smitten with one another. Dianne returned to her native Australia when the program was over to spend Christmas with her family, while he stayed in the UK. Despite living hundreds of miles apart, the couple has publicly declared their love for one another on social media.

First, his girlfriend Dianne posted a photo of herself enjoying the holiday on an Australian beach on her Instagram. She sat close to a large inflated flamingo. "Don't worry about me @Joe sugg I have a big ole floating pal with me safe and sound," she said in the caption. She also made sure that she was secure there because she didn't want her lover to worry in the least.

The same goes for Sugg's response to her post: "That big ol' HAT is the only thing that frightened me in this shot!" The couple is deeply in love with one another. They are overjoyed to have discovered one another. grateful that they were introduced to one another on Strictly Come Dancing.

He currently resides in London, England, where she currently lives with her girlfriend. On their separate social media accounts, they are frequently pictured together.

Attractive man Joe Sugg is 1.74 meters tall, or 5 feet and 8 inches. He is about 62 kg (137 lbs) in weight. He also has a waist measurement of 31 inches and a chest measurement of 37 inches. Additionally, he has 13-inch Biceps. In addition, he has light brown hair and blue eyes.