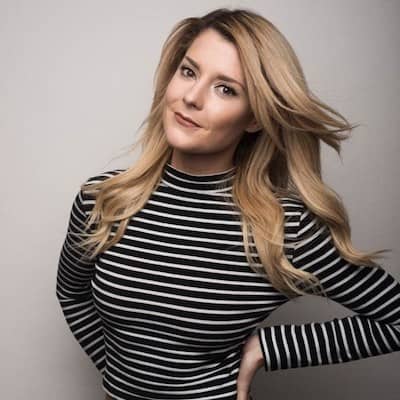 Grace Anne Helbig is an actor and YouTuber. She is the hilarious woman behind the hugely popular on her YouTube channel and the podcast Not Too Deep with Grace Helbig. This eccentric YouTuber is also a successful actress, producer, and author. She was witty and fun-loving from a young age, and she loved to make people laugh.

Grace Helbig was born on September 27, 1985, as one of three children to John Helbig and Theresa McGinnis in New Jersey, United States. John and Tim are her two brothers. She excelled in athletics as a student, becoming a successful track star and medal-winning pole-vaulter. She attended Ramapo College after graduating from Gateway Regional High School. During her college years, she developed an interest in comedy, which led to a career as a YouTube comedian and, later, as an actress.

Grace Helbig's YouTube career took an unexpected turn. She started a daily vlog in 2006 to kill boredom and keep herself entertained while house-sitting for a family. Her hobby quickly turned into a passion when she realized how many people were watching her videos.

Her videos quickly piqued the interest of My Damn Channel founder and CEO Rob Barnett, who invited her to host her own video blog web series DailyGrace on the channel website. The series, which debuted in 2008, became so popular that it was given its own YouTube channel in 2010. The channel was a huge success, propelling Helbig to great heights as a YouTube comedian.

She left DailyGrace in 2013 to concentrate on her own YouTube channel. Over the years, her personal channel has grown to over 2.7 million subscribers.

Around this time, she also began collaborating with other YouTubers, particularly Mamrie Hart, with whom she co-created the summer travel-themed web series #HeyUSA, which toured across the United States. The show aired on the YouTube channel Astronauts Wanted.

Grace Helbig began appearing on television and in films alongside her YouTube career. She appeared in numerous television commercials and had minor roles/cameos on the shows Money from Strangers, Tripping Out With Alie & Georgia, Showbiz Tonight, and Today with Kathie Lee and Hoda.

Her film career began in 2014 with a starring role in Camp Takota, which was described as "entertaining, sweet, funny, and filled with adult-oriented humour" by some critics. In 2015, she appeared in Smosh: The Movie as Stephanie, YouTube's main receptionist. She began hosting The Grace Helbig Show, a weekly primetime E! talk show, in April 2015. In 2019, she appeared in the film The Wedding Year.

Not Too Deep with Grace Helbig, the multifaceted personality's audio-video podcast, debuted in September 2014. The podcast premiered at the top of iTunes' Top Podcasts chart. New full-length audio episodes are released on SoundCloud and iTunes every Monday.

Grace Helbig has won a number of awards and accolades for her comedic work. DailyGrace, her web series, was named King of the Web in October 2011.Refinery29 named her one of the 30 Under 30 Rising Stars in Los Angeles in 2013. She was named one of Social Media Week Los Angeles' Social 25 digital media influencers and organizations the following year. Helbig's YouTube channel was ranked 36th on New Media Rockstars' Top 100 Channels in 2014.

Grace Helbig was in a relationship with American singer Chester See.
Since 2014, they have been together. They split up in May of 2017. Grace then began dating another man in 2019. Elliot Morgan is a stand-up comedian and writer.

Furthermore, she has been involved in some contentious issues sparked by her Tweets. There is also talk that she is leaving My Damn Channel. It has not yet been confirmed.

Grace Helbig's body is shaped like a banana. She is also 5 feet 9 inches tall and weighs around 59 kg. She also has breasts, a waist, and hips that measure 35-25-36 inches. Similarly, she is dressed in a size 6 dress and a size 9 shoe. Her bra size is also 34A. Her eyes are brown, and her hair is blonde.