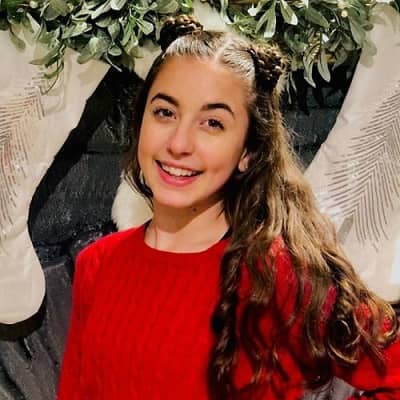 Gianina Paolantonio is an American dancer, social media personality, singer, and actress. She was recognized by the people due to her appearance as a contestant on the 8th season of Lifetime’s dance competition reality series “Dance Moms”.

She was born on June 10, 2005, in New Jersey, United States. Talking about her family her father's name is john Paolantonio, her mother's name is Joanne Paolantonio and her brother's name is Joey. She has a dog named Rocco. Looking at her childhood we get to know that she started to dance after she was born. And the dance was taught by her mother. Her nationality is American. Her Horoscope is Gemini. Currently, she is 17 years old.
Talking about her educational career there is no information regarding where she is attending her education but looking at her age she might be in her schooling. She is a private person as she keeps her personal and professional life private and away from the limelight.

Talking about her professional life, when she was nine years old when she was cast as Amanda Thripp in the Broadway production of “Matilda the Musical” where She used to entertain the audience for 18 months and then left the show in September 2016. After she left the show, she went to work for Mariah Carey at the NBC Rockefeller Christmas Tree Lighting. She went to the legendary singer’s “All I Want for Christmas is You” tour which was organized in New York and Las Vegas.

She was also a dancer at Madison Square Garden and Brooklyn Nets Kid at Barclays Center. She often creates dance videos for GoNoodle which is used to promote healthy exercise for over 11M elementary school children all over the US every day.
In the year 2018 to 2019, she used to perform along with the big battle Dance Crew on the Nickelodeon show “Lip Sync Battle Shorties”.She was also appointed as an ambassador for the dancewear brand Capezio. Along with that, she has also played many commercials for Reese’s Peanut Butter Cups, Pace Salsa, and Simon Premium Outlets. She was also cast as the Pointe Ballerina in the musical drama known as “The Greatest Showman” which was her first cinematic Experience. She was also seen on the 8th season of “Dance Moms” which was with her mother Joanne. This show was created by Collins Avenue Productions.
Talking about her social media she is active on social media like Instagram, Facebook, Twitter, and TikTok.

Talking about her personal life she is single at the moment and very small to be in any kind of relationship. She is more on to her career rather than being in any kind of relationship. She is a pretty good girl she might be in a relationship in her upcoming years.
Awards and Net Worth
Talking about awards till now she hasn't won any kinds of awards but she might win in the upcoming future as she is a talented and hardworking person.
Looking at her salary and Net Worth there is no information regarding her salary but her current estimated net worth is around June 10, 2005. She earns through her dance, singing, and YouTube.