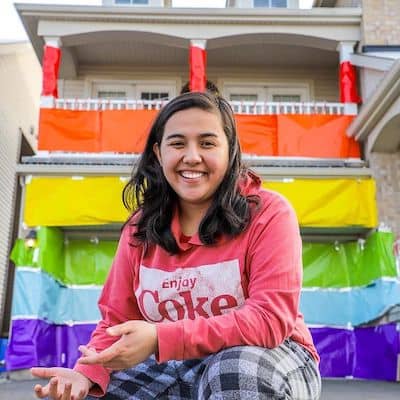 Elle Mills is a YouTube celebrity who rose to prominence by producing amusing content on her channel, 'ElleOfTheMills.' Starting her channel in 2012 at the age of 13, she quickly rose to stardom and established herself as one of YouTube's most entertaining young stars.

Elle Mills was born in Manila, Philippines, on July 17, 1998. Janette, her mother, is Filipino, while her father is from Ontario, Canada, where she was raised. She has a brother named Jay, as well as two half-sisters named Melinna and Melissa. She had always enjoyed making films and was anxious to share them to people since she was a child. Joey Kidney, a YouTuber, introduced her to the YouTube audience. Elle believes that her YouTube expertise will lead to opportunities in traditional media, allowing her to create material on a wider scale.

Elle Mills launched her YouTube channel, ElleOfTheMills, on March 28, 2012, and as of August 2018, she had over 1.4 million subscribers and over 114 million views. The first video she posted to her channel was "Call Me Maybe," a music video she created with a buddy.

She is credited with creating various unique videos. Elle, who was enamored with the program 'Glee,' created small fan trailers for the show's couple Will and Emma. She created a teaser for the show called 'So Once Stranger Things,' which went viral on Twitter. Some of her films are amusing, such as "If Troy Bolton Were Christian Grey" and "If Stranger Things Were a Romantic Comedy."

She uploads vlogs on a weekly basis, and her family and friends frequently feature in them. 'Coming Out (Elle Mills Style)', one of her vlogs, went viral, significantly increasing her subscriber count. Because of the growing popularity of her channel, she has been featured on 'E! Online,' 'On Air with Ryan Seacrest,' 'Buzzfeed,' and MTV. Many of her posts have also been republished on other websites.

Her net worth is $181K based on her earnings and income. She has published 165 videos, which have received over 162.2 million views. Furthermore, her audience has been continuously rising month after month.

Elle Mills is possibly single right now. She is more concerned with her profession than with being in a love relationship. Perhaps she wishes to keep her romance covert. She did, however, come out as bisexual in a YouTube video she released on her channel.

She also posted a picture of herself kissing another girl on her Instagram profile, claiming it was her first kiss. But neither of them mentioned being in a romantic relationship. As a result, it is a one-time affair. In addition, she hasn't found anyone with whom she can be in a relationship.

Furthermore, she was previously married to a man named Mitch. And Mitch is her sister's lover. However, they were legally married but just for the sake of the YouTube video. It started off as a joke but ended up becoming serious. They legally divorced after only a few days. And they're now pals because it was all for the video and nothing serious.

Elle stands 5 feet 2 inches tall and weighs 78 kg. Her additional physical dimensions, such as breast size, waist size, and hip size, are currently unavailable. Because all of those measurements are still being reviewed. She also has black hair and dark brown eyes.