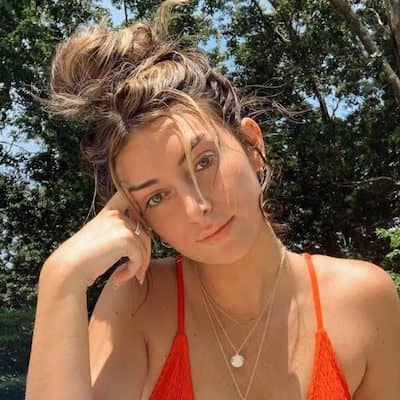 Brianna LaPaglia is a social media star, blogger, and content creator from the United States. She is best known for hosting podcasts for Barstool Sports, a popular digital media company. Brianna rose to fame after several of her TikTok videos went viral on the internet. She went on to become a TikTok star, posting comedic and relatable life videos. Her popularity skyrocketed after she began posting videos of herself hungover, so much so that she began referring to herself as the CEO of hangovers.

Brianna LaPaglia was born in Boston, Massachusetts, on June 17, 1999. Brianna grew up in Boston and was drawn to social media at a young age. She attended Baldwin Wallace University in Ohio after graduating from high school, where she was a member of the women's swimming and diving team. Brianna was studying public health at the time when she began posting videos on her TikTok account, Brianna Chickenfry. She released her first video in March 2019 and quickly rose to prominence for her lip-sync and comedic videos.

Brianna LaPaglia gained popularity after she began posting videos of herself hungover while giving advice on friendships, relationships, partying, and other aspects of life. Her videos began to receive thousands of views and likes, establishing her as a well-known TikToker. Her TikTok popularity helped her gain followers on other social media platforms such as Instagram and Twitter. Meanwhile, her videos piqued the interest of the popular digital media company Barstool Sports, which contacted Brianna about working for the company as an intern.

Brianna LaPaglia's big break came in the summer of 2020 when she was hired as a permanent employee by Barstool Sports after only a week as an intern. In July 2020, she was offered the opportunity to host her own podcast, PlanBri Uncut. Brianna dropped out of Baldwin Wallace University in September 2020 to focus on her career as a podcaster and social media influencer, despite her desire to attend medical school after graduation.

Brianna's podcast grew in popularity over time, and she was approached to co-host other podcasts such as Because We Got High, which she co-hosts with Ria and Kelly. She has also collaborated with Dave Portnoy and Josh Richards on the popular BFFS podcast. Brianna LaPaglia, in addition to hosting podcasts, contributes to Barstool Sports as a blog writer, posting blogs on the PlanBri section of the company's main website. Brianna has created her own merchandise in collaboration with Barstool Sports due to her popularity there. Her merchandise, which includes a variety of accessories and clothing, is well-known among her fans.

Brianna Lapaglia's net worth is estimated to be between $1 million and $5 million. She has amassed enormous wealth as a result of her primary career as a TikTok Star.

Brianna LaPaglia is dating Nik Pelligrino, whom she frequently features on her social media pages. She enjoys spending time with her friends in addition to creating content for social media. She also likes to travel and discover new places. One of her favorite pastimes is going to the beach.

She has dark brown hair and brown eyes. She stands 5 feet 10 inches tall and weighs 53 kilos. Her body measurements are 34-24-33 inches.

As a TikTok star, she is active on social media. she has accounts on Instagram with 381k followers, youtube with 32.1k subscribers, Twitter with 99.1k followers and TikTok with 1.5M followers.