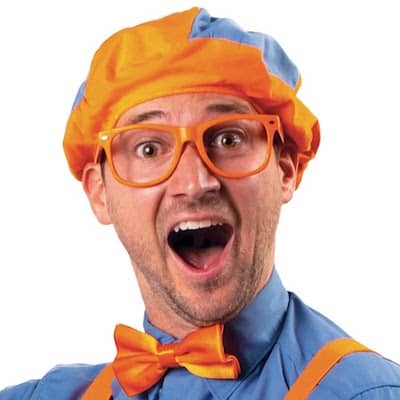 Stevin John, better known as Blippi, is a popular American children's entertainer and educator who rose to prominence through his YouTube channel Blippi. He plays the character of Blippi and teaches children a variety of things in a way that is not only easy for them to understand but also fun and entertaining.

BLiPPi was born on May 27, 1988, and is 32 years old. His full name is Stephen John Grossman, but he is better known by his online aliases, 'BLiPPi' and 'Steezy Grossman.' His zodiac sign is also Gemini. Steven, likewise, was born in Ellensburg, Washington, and now resides in Las Vegas. He holds an American nationality, a member of the Caucasian ethnic group, and a Christian. Similarly, he has not shared much information about his family members, such as his parents' names and siblings' information.

He was raised in a farm family with tractors, cows, and horses. Similarly, he aspired to be a limousine driver and a fighter pilot when he grew up. He served on active duty in the airforce at the start of his career and is a military veteran.

He was a loadmaster for the C-17 Globemaster aircraft at the United States Air Force's 4th Airlift Squadron. Similarly, he used to handle the aircraft's administration. Furthermore, he used to work on calculations and cargo placement in aircraft. He also worked these permissible center of gravity limits throughout the flight.

Since releasing his first video in January 2014, his channel has grown tremendously and now has over 13.2 million subscribers. Blippi Learns about Jungle Animals for Kids is his most popular video, with over 800 million views. Based on the main channel, there are also foreign language channels – Spanish, Portuguese, German, and Arabic. There is also a secondary channel Blippi Toys, which currently has 7.75 million subscribers. Children can watch Blippi on Amazon Prime, Roku, and Hulu in addition to YouTube.

Stevin John rose to prominence through his Blippi children's educational YouTube channel, where he posts entertaining videos teaching kids everything from alphabets to colors and nursery rhymes. In the videos, he plays the role of Blippi, a childlike, energetic, and inquisitive character. He wears a blue and orange beanie cap, a blue shirt, orange suspenders, a bow tie, and glasses while explaining how various things work in a way that young children can understand. Many of his videos feature construction equipment as well as other outdoor activities such as visits to parks, farms, museums, and local fire stations.

He got the idea for Blippi after observing his two-year-old nephew watching tractor and excavator videos with upbeat music playing in the background. He realized that the content quality was simply inadequate. As a result, he decided to produce high-quality educational videos for children himself.

He began by creating a character (Blippi) whose name was simple for the kids to pronounce and sounded cheerful. His mother designed the now-famous costume for the character. Because of the high cost of animation, he chose live-action videos, which he initially recorded and edited himself. Later, as his fame grew, he hired professionals to assist him.

As his brand grew, he introduced Blippi merchandise such as dolls, DVDs, CDs, and apparel. Blippi-branded K-Swiss shoes are also included. In addition, he has launched a live tour, Blippi the Musical, to bring fun and entertainment to children on stage. Stevin John, on the other hand, does not play Blippi on stage.

Stevin began his career in the United States Air Force before embarking on his YouTube career. He was a Loadmaster for the C-17 Globemaster of the 4th Nuclear Airlift Squadron. However, he realized that the military was not the right fit for him, and after a two-year stint in the air force (2006-2008), he began a career in the digital space. He started working as a video editor and marketing consultant for start-up companies in 2009, and he did so for the next five years. During the process, he learned skills that would be extremely beneficial to his YouTube career.

Prior to launching Blippi, he was known as Steezy Grossman on the internet. He experimented with gross-out comedy videos there. One particularly grotesque video, which has since been removed, sparked outrage but had no effect on his popularity. He later expressed regret for doing so.

Blippi's relationship status is straight, and he is in a long-term relationship with Alyssa. They have frequently shared many pictures together and are deeply in love. There is no information in the media about his body measurements. However, based on his physical appearance, he has fair skin, light brown hair, and brown eyes. Most of the time, he is dressed in his 'BLiPPi' attire.

There is no information in the media about his body measurements. However, based on his physical appearance, he has fair skin, light brown hair, and brown eyes. Most of the time, he is dressed in his 'BLiPPi' attire.